CAFE Insiders can enjoy this recording of Preet reading his note, “The Importance of ‘Thank You, Good Luck, and Goodbye’” and read his note in the CAFE Insider Newsletter every Thursday.

As you might imagine, I have a great many thoughts and feelings about the abrupt firing of the U.S. Attorney for the Southern District of New York, Geoffrey Berman. The manner and timing of the termination raise countless questions, and it is a shame that Attorney General Bill Barr will not come before the House Judiciary Committee until the end of July to be asked some of those questions.

My concerns are only compounded by the extraordinary hearing that took place yesterday in that committee. Two DOJ officials testified about their perceptions of political decision-making. Most disturbing was the testimony of a current Assistant U.S. Attorney (AUSA) in Maryland who served in Special Counsel Robert Mueller’s office and then was detailed to the U.S. Attorney’s office in D.C. to see through the government’s case against Roger Stone. That AUSA, Aaron Zelinsky, bravely told Congress and the public that “Roger Stone was being treated differently from any other defendant because of his relationship to the President… and that the U.S. Attorney’s sentencing instructions to us were based on political considerations.”

That is stunning stuff. Especially coming from a current employee of DOJ, whose leadership must be furious.

And so, like many DOJ public servants and alumni, I feel disappointment and dismay at what looks like deeply political conduct, to favor a presidential friend and to rein in the most independent prosecutor’s office in the department, SDNY. I also feel a bit angry that the President and Attorney General are so blithely undermining the department’s reputation and the public’s faith in its impartiality.

But there’s something else I’m feeling too. As Yogi Berra once said, “It’s like déjà vu all over again.” It was 39 months ago that I was fired abruptly and without explanation after personally being asked to stay on by Donald Trump.

As in Geoff’s case, my firing was sudden but not completely unanticipated. There has been credible reporting for some time that Trump has been unhappy with SDNY and its handling of Michael Cohen’s case, among other things. There was even reporting that Geoff was about to be replaced with a particular official at DOJ when those plans were scuttled because SDNY indicted two associates of Rudolph Giuliani, and sacking Geoff then would be too explosive. In my own case, not long after Trump was sworn in, I began to believe I could be terminated at any time. In particular, when Sally Yates was summarily fired on the evening of January 30, 2017, I became wary of my own precariousness. Would I be asked to take a position in some case that I thought was unsound or unconstitutional? That could certainly happen. At the same time there was increasing grumbling about “the deep state.”

In anticipation of that possibility, I met with our office manager and made sure that if I were fired on a minute’s notice, there would be no bureaucratic loose ends. We also moved to come to resolutions on some outstanding cases, including one involving a prominent elected official in New York. I did one more thing because I was concerned about being muzzled if I were fired under contested circumstances. Just a week before I was pushed out, I took personal ownership of my twitter handle @preetbharara. As in the case of Geoffrey Berman, my firing was sudden but not shocking.

Like Geoff, I was in a 24-hour weekend standoff with the White House as I insisted on being fired by the President. Our situations were different insofar as Geoff, as a court-appointed U.S. Attorney, had a legal argument – backed by a 1979 OLC opinion – that only the President, not the AG, could fire him. Still, the parallels are striking and made me think back to going into work that Saturday morning on March 11, 2017, not certain how the day would unfold. I sat in my office watching the news reports with my deputy Joon Kim and chief counsel Joan Loughnane. I kept expecting the phone to ring with the news. Hours passed. My daughter texted me, asking why she had gotten not one but two New York Times news alerts about my situation. We ordered summer rolls from a local Vietnamese joint in Chinatown and settled in. Finally the call came and I hit send on the office-wide farewell email I had drafted that morning. I also marked it with a tweet from my new personal account.

As I was packing my bag, I looked at Joon and Joan and became very sad. Sure I was sad to be leaving but I could not complain. I had a seven-and-a-half year run, longer than I could ever have hoped for. We had a lot to be proud of. I had expected to be gone by then anyway, as would have been the norm when the White House changed parties. What I was sad about was leaving the office on a Saturday afternoon without the chance to say a proper goodbye to all the people I loved so much. As I was bemoaning this, Joon and Joan looked at each other and softly smiled. They said, “You know, Preet. We can let you back in the building Monday so you can speak to the office.”

It was an obvious solution, but it hadn’t occurred to me and we all laughed. In an abundance of caution, they didn’t advertise my Monday speech, just scheduled an office-wide meeting in the second floor library for 4 pm. I brought my family with me. I got to see one more time the court security officers, AUSAs, paralegals, assistants, interpreters, press staff, and everyone I had worked with for so many years. It is hard to explain how important it was for me to be able to say three simple things: thank you, good luck, and goodbye.

When I walked out of the building, the office staff were lined up on both sides to give me a sendoff. To my grand surprise, Joon had arranged for a bagpipe. Why? Because he knew I love bagpipes. This was harder than it sounds, booking a bagpiper on a weekend, just before St. Patrick’s Day. You can see it here.

I feel a particular sadness now, for my old office. There are many parallels between our departures, but one unfortunate difference is this: I got to say my final farewell in person. Because of the pandemic and so many people working remotely, Geoff did not have that opportunity, in real time. Eventually, though, I trust he will be able to say in person those three important things, in his own words, to the office he loved: thank you, good luck, and goodbye.

Be kind and be safe. 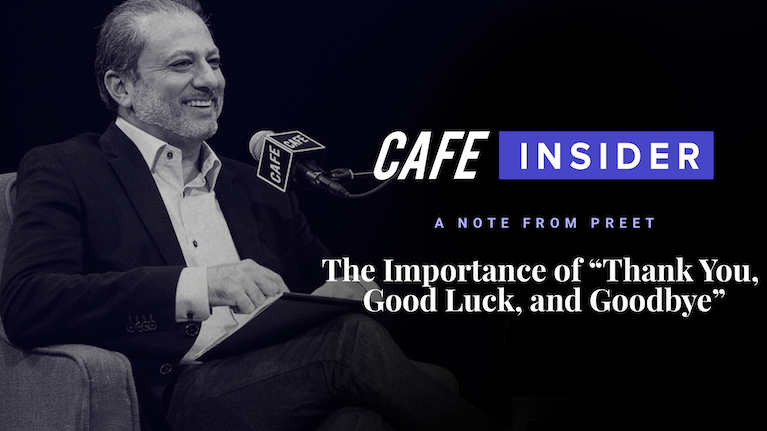 Note from Preet: The Importance of “Thank You, Good Luck, and Goodbye”