Back at the SDNY, we used to play this game — or at least, what passes for a game in a prosecutor’s office: “Would you cooperate…?”  (Yes, there are real-life variations of this game that are more fun, but it worked for us).

Would you cooperate… John Gotti?  Hell yes, sign me up, if he can deliver the rest of the Gambino Family and a couple other Bosses.

Would you cooperate… Bernie Madoff?  Tough one.  He’s a massive fraudster, and it’s not clear he’d be able to make a case against anyone else of similar caliber.

Would you cooperate… Osama Bin Laden?  (Before he was killed, obviously; though posthumous hypotheticals are allowed).  Can’t see that.  Well, what if he gave you the entire leadership of Al-Qaeda?  Still not enough.  How about if he knew of an attack that was about to happen?  Well, in that case, you’d have to think about it…

The “Would You Cooperate” game works because there is an inherent tension to any cooperation scenario.  Whenever a prosecutor signs up a defendant as a cooperator, the prosecutor to some degree takes ownership of the cooperator; he’s my witness now, and I’ll have to live with whatever he has done.  But it also takes a bad guy to catch other bad guys.  Often, the more serious the cooperator’s own criminal conduct, the bigger the fish he can reel in.

So here’s a tough one: Would you cooperate Ghislaine Maxwell, the newly-indicted accomplice who helped Jeffrey Epstein run his grotesque, twisted child molestation ring?

My answer is yes.  Sick and sickening as Maxwell’s alleged conduct is, I would cooperate her because the potential payoff is so massive.  As viscerally gross as it might feel to bring a person like Maxwell onto Team America, ultimately her cooperation could do much to bring down other perpetrators and to help her victims realize some measure of justice.

Sometimes as a prosecutor you just have to do the ugly, utilitarian math.  I cooperated some bad guys.  Really bad guys.  Guys who spent years, decades, careers committing crimes.  Drug traffickers.  Home invaders.  Mobsters.  Murderers.  I had one cooperator who had shot so many people, we tried to count them all up but eventually settled for a rough estimate: mid-30s.  (It’s not quite as bad as it sounds; he often intentionally shot people in the legs to “send a message” and killed only — “only” — three people).

And I made enormous cases against bosses, kingpins, killers based on testimony from those cooperators.  Nobody said this stuff was easy.  If you want to make big cases, you need to cooperate bad guys.

For more content like this, join the CAFE Insider community, where we explore issues at the intersection of law and politics.

An important qualification right up front on Maxwell.  I would cooperate her only if she was fully on board, the SDNY way.  In some prosecutor’s offices, cooperation can be limited or selective: tell us what you know about this one case, or this person, and we’ll cut you a deal.  But an SDNY cooperator must give up everything — and I mean everything.

First, the cooperator must admit, and plead guilty to, every crime he ever committed.  We sometimes would start interview sessions by telling potential cooperators to go back to the first time they stole candy from the drugstore in grade school; we’d progress to the bigger stuff from there.

And, crucially, SDNY cooperators must give up all information they have on crimes committed by others — whether the crimes are small or large, and whether the others are mopes or powerhouses.  There’s no holding back, there’s no selective cooperation, there’s no I’ll-give-you-this-but-not-that.  Look, for example, at Michael Cohen, who tried to cooperate with the SDNY but was rejected because he was unwilling to answer all the prosecutors’ questions.  There’s no such thing as partial cooperation in the SDNY.

And the cooperator must testify against others if asked.  I had many prospective cooperators try to go this half-way, I’m-not-quite-a-snitch route:  I’ll give you information on background about so-and-so but I won’t testify.  No deal.

Assuming Maxwell did cooperate fully, she almost certainly would get a break at sentencing, likely a big one.  In the SDNY, prosecutors don’t negotiate with cooperators for a particular number of months or years in prison.  Rather, the uniform SDNY deal is this: if the cooperator upholds her end of the deal, then the prosecutor writes a letter to the judge laying out all the bad (the cooperator’s crimes) and the good (the cooperator’s assistance to the government in making other cases).  The sentence then sits entirely at the judge’s discretion.

Cooperators almost always fare far better at sentencing than they would otherwise.  To take one example from my own experience, longtime Gambino Family powerhouse Michael DiLeonardo (nicknamed “Mikey Scars” — but, as he testified many times, not because he gave scars to others but because he had been attacked by a dog when he was a child) pled guilty to three murder conspiracies, racketeering, extortion, and other crimes.  He also was a legendary cooperator, helping bring down over 80 other mobsters.  His ultimate sentence: about three years in prison.  You can argue that’s too short.  But you can’t dispute that he helped bring a hell of a lot of other dangerous criminals to justice.

Here’s the big question for Maxwell: Who could she deliver?  Epstein is dead, so he’s out of the mix (though if Maxwell could help identify his remaining assets and get compensation to his victims, that would be a plus).  While many boldface names have been at least connected to Epstein, we simply don’t yet know who Maxwell could implicate in criminal conduct.

But the SDNY did drop a tantalizing clue.  Maxwell’s case, like the Epstein case, is staffed primarily by the Office’s Public Corruption Unit.  That’s unusual.  Ordinarily, large sex trafficking cases would be prosecuted by the Violent and Organized Crimes Unit.  (I spent most of my SDNY career in the Organized Crime Unit, its organizational predecessor, where I charged and tried large sex trafficking cases).

So the fact that the Public Corruption Unit is the running point on the Maxwell case tells me there is some public official — could be past or present, domestic or foreign — involved somehow, some way, in the case.  Could be a defendant, could be a witness, could be somebody who committed bad acts that are not necessarily chargeable as federal crimes.  (Note that federal law makes it a crime to knowingly travel across state or international borders to have sex with a minor, or to knowingly transport a minor across a border to engage in illegal sexual acts).

We don’t yet know the full extent of Epstein’s conduct.  But Maxwell likely does.  And, like it or not, cooperation is the only way for the SDNY to find out everything she knows.

The SDNY owes it to Epstein’s victims to track down every last person responsible for abusing them, and for facilitating their abuse.  And Maxwell might be the best, or the only, way to do that. 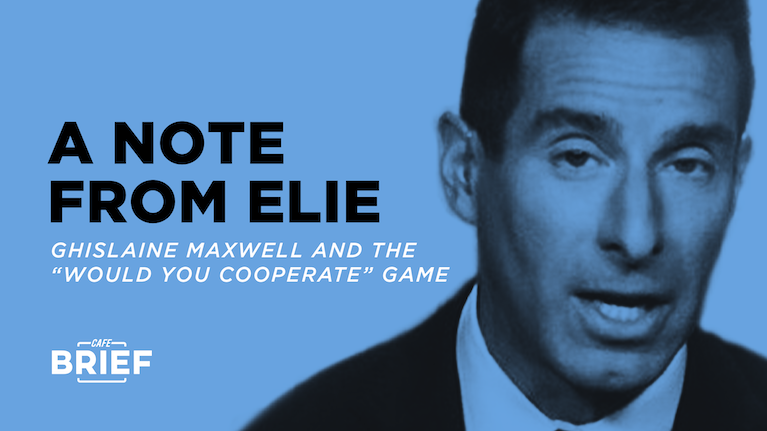 Note From Elie: Ghislaine Maxwell and the “Would You Cooperate” Game