A weekly Note from Elie is part of the CAFE Brief, and Insider members can listen to a recording of the note the same day. Please enjoy Elie reading this week’s note, “Barr’s M.O., Lacking Hollywood Drama, is Subtle and Dangerous,” and read his note in your inbox every Friday.

Here are a few things that I never, ever saw happen over my entire fourteen-year career as a federal and state prosecutor:

— A patrol cop nervously standing watch by a crime scene when an arrogant Fed wearing mirrored shades suddenly shows up in an unmarked black car, brushes past the confused local, and growls, “This is MY crime scene now.  You’re relieved of your post.”

— A grizzled police lieutenant calls a rogue, doesn’t pay-by-the-rules, beat cop into his office and intones solemnly, “I need your gun and your badge.”

— An entrenched district attorney, arguing with a loose cannon young prosecutor about whether to charge a case against a well-connected politician, slams both palms down on his desk and yells, “I’m ordering you to STAND DOWN, rookie.”

Sorry to disappoint.  Truth is, I always wanted to see some kind of awesome, Hollywood cliche moment play out on the job.  And yes, we prosecutors would sometimes give each other over-the-top, dramatic movie lines, but only in jest.  Turns out the movies are great, but they’re movies for a reason.

The furor over Attorney General William Barr’s recent attempt to infiltrate the Southern District of New York — I still can’t figure out if it was corrupt or bungled, though I suspect both — rests primarily on the fear that Barr wants to take control so he can kill one or many of the pending SDNY cases that threaten powerful people and interests in the President’s orbit.

That certainly is my primary concern, especially given the impressive work the SDNY has managed to get done in this age of unprecedented politicization of the Justice Department.  Even under Trump and Barr — two all-time giants of ruthless self-protectionism — the SDNY has stayed true to its reputation for fierce independence.

During the Trump administration, the SDNY indicted and convicted Michael Cohen, specifying in a court filing that Cohen acted “in coordination with and at the direction of Individual-1.”  (That happened before Barr took office; no way in hell he allows that line to go into an official DOJ court filing; and soon after Barr became AG, he reportedly attempted to exert influence by — among other things — questioning the SDNY prosecutors who charged Cohen and instructing officials at Main Justice to draft a legal memo to undercut Cohen’s conviction.)

The Office indicted Lev Parnas and Igor Fruman, two close business associates of Rudy Giuliani, for illegal foreign campaign contributions to pro-Trump political entities, and it continues its criminal investigation of Giuliani himself.

The SDNY indicted old Trump pal Jeffrey Epstein — and suggestively staffed the case in part out of the Office’s Public Corruption Unit — and continues to investigate his co-conspirators.  (Though it is entirely unclear what on earth is taking so long).

The SDNY has an ongoing investigation of Deutsche Bank, Trump’s lender of choice.  And it indicted the Turkish bank Halkbank, despite Barr’s resistance and Trump’s outrageous promise to the Turkish President to put a lid on the case, according to John Bolton.

But the concern about Barr stepping in or inserting a crony to stop these cases (or perhaps others that we don’t yet know about) should not be undermined by a Hollywood notion of what that process would entail.

For more content like this, join the CAFE Insider community, where we explore issues at the intersection of law and politics.

What might it actually look like if Barr did try to seize control of the SDNY and block its cases from going forward?  Would Barr show up unannounced at One St. Andrews Plaza, flanked by his security detail, and take over the U.S. Attorney’s private office overlooking the Brooklyn Bridge?  Would a team of feds in unmarked cars swoop in, storm the building, and walk out carrying taped-up boxes of case files?  Would the young AUSA on her way to the courthouse to present a case to the grand jury suddenly get a tap on the shoulder from some DC suit telling her to turn back around?  It all feels a bit far-fetched and, perhaps as a result, unlikely.

But the truth is, Barr — and anyone who blindly does his bidding — can undermine a case in a less dramatic but more efficacious manner.  Sometimes it’s as simple as a shrug of the shoulders, a couple lazy case citations, and a myopic conclusion of “Eh, I don’t quite see it.”

Take, for example, Barr’s whitewashing of Robert Mueller’s findings on obstruction of justice.  Mueller lays out an overwhelming case that Trump obstructed justice not once, but many times over.  Over 1,000 former federal prosecutors (including me) signed a letter concluding that the evidence was more than enough to justify an obstruction charge.

Yet Mueller unforgivably failed to state his conclusion clearly and directly, instead playing coy with double-negatives about not clearing the President.  Into the vacuum stepped Barr, who after just days of review, declared summarily that “the evidence is not sufficient to establish that the President committed an obstruction-of-justice offense.”  I know over 1,000 former prosecutors who disagree.  And to this day, Barr has never provided a substantive defense of his position beyond noting that Trump was not charged with an underlying offense — which is no defense under the law (just ask Martha Stewart, Scooter Libby, and Roger Stone, all of whom were convicted of obstruction offenses without an underlying crime).  Indeed, Mueller himself rebuked Barr for publicly characterizing his report in a way that “did not fully capture the context, nature and substance of this Office’s work and conclusions.”

Barr has carried out similar whitewashes in other cases, under cover of law.  He refused to open a criminal investigation of bribery, extortion, or solicitation of foreign election interference on the Ukraine scandal — he even tried to prevent the whistleblower’s complaint from going to Congress — yet he set up a special pipeline to receive wacko allegations from crack private detective Rudy Giuliani.  Barr’s theory for doing nothing about Ukraine, it seems, is that solicitation of campaign dirt from a foreign national is not a crime — a legal position that is untested at best and dubious at worst.

And Barr covered himself in faulty legal citations and shoddy logic when he twisted facts and the law to try to clear Michael Flynn, despite Flynn’s own guilty plea (two, in fact).  Widely-respected former federal judge John Gleeson reviewed the matter for the court and concluded that the “reasons offered by the government are so irregular, and so obviously pretextual, that they are deficient.”  While the Court of Appeals for the D.C. Circuit ordered the district judge to dismiss the Flynn case this week, that ruling did not vindicate Barr. It merely reaffirmed the procedural principle that the executive branch, through the Justice Department — not the Judiciary — gets to decide whether to prosecute or dismiss a case. So Barr’s home-cooked dismissal likely will stand regardless of its factual and legal infirmity.

While the SDNY drama seems to have subsided, at least for now, with the temporary appointment of well-qualified SDNY career prosecutor Audrey Strauss as Acting U.S. Attorney, that doesn’t mean everything is kosher.  So long as Barr remains Attorney General, he can oversee the SDNY.  And as fiercely independent as the SDNY has long been, it is indeed part of DOJ, and subject to the Attorney General’s final say-so.

The danger isn’t that Barr and his people might storm the SDNY and start killing cases by imperial decree.  No, Barr can squash cases, or limit them, even without the dramatics.  It can be much more subtle.  A twist of the law here, a claimed factual insufficiency there, and a perfectly legitimate, righteous case can get knocked off the rails.

Barr’s interference likely won’t be as dramatic as we imagine from the movies.  But it could be every bit as dangerous. 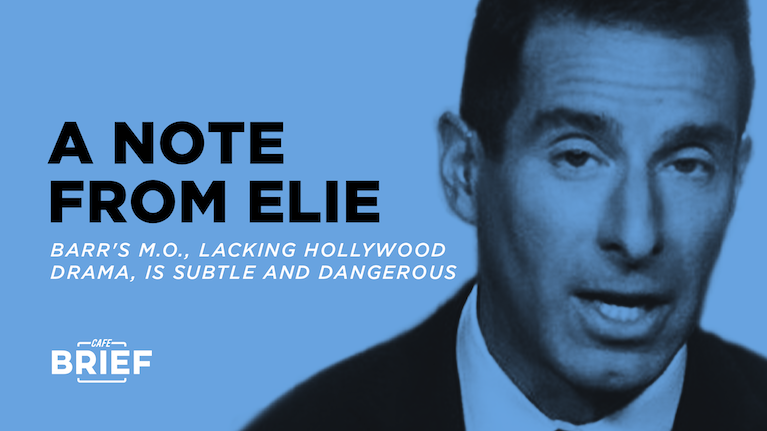