A weekly Note from Elie is part of the CAFE Brief, and Insider members can listen to a recording of the note the same day. Please enjoy Elie reading this week’s note, “Jerry Nadler’s Talk is Brash, but his Walk is Timid,” and read his note in your inbox every Friday.

Jerry Nadler’s talk is brash, but his walk is timid.

As Chair of the House Judiciary Committee, Nadler holds the power and responsibility to ensure accountability from the Department of Justice and Attorney General William Barr.  But, thus far, Nadler has failed.  Barr has repeatedly played Lucy to Nadler’s hapless Charlie Brown — Barr yanking away the football and smirking as Nadler predictably whiffs and winds up flat on his back, birdies chirping overhead.

Barr, perhaps emboldened by Nadler’s abject inability to enforce any measure of accountability, has been on a tear lately.  Just in the past few weeks, Barr removed the U.S. Attorney for the Southern District of New York, Geoffrey Berman, unsuccessfully trying to install unqualified loyalist Jay Clayton and lying to the public about Berman’s intentions in the process.  The Court of Appeals for the D.C. Circuit handed Barr a win by permitting him to toss the Michael Flynn case, despite Barr’s transparently political machinations.  And a career prosecutor testified before Nadler’s committee that DOJ bosses went easy on Roger Stone, solely because of politics — to many justified gasps from the public, but no further action from Nadler.

Nadler, to be sure, has never been short on tough talk.  He has issued boldly-worded decrees about habitual obstructionism by the Trump Administration and its corrosive politicization of DOJ: “We have both a duty and a moral obligation to protect the rule of law in our country, and we intend to do just that.”  And he has vowed to hold President Donald Trump and Barr “accountable.”  But Nadler has done next to nothing to back up his decrees.

In the wake of the Mueller report, for example, Nadler opened an investigation into potential obstruction of justice by Trump and his administration.  Nadler declared that he had seen “very substantial evidence” that Trump was “guilty of high crimes and misdemeanors.”  Serious stuff.  But then, despite issuing a rash of subpoenas, Nadler ultimately procured public testimony from only one eyewitness – the smug, smirking Corey Lewandowski, who delightedly turned the proceeding into an SNL “What’s Up With That”-level farce.  Nadler declared Lewandowski’s conduct at the hearing  “completely unacceptable” — and then did precisely nothing about it.

Barr has made sport of brushing off Nadler’s meager attempts to ensure accountability.  Nadler subpoenaed Barr in 2019 for the full, unredacted Mueller report; Barr responded by tossing the subpoena in the trashcan like a piece of junk mail.  Meanwhile, a private watchdog transparency group went to court and got far more done than Nadler ever did, eventually obtaining key information that had been redacted from the original version of the report.

In May 2019, Barr testified about the Mueller report in the Republican-controlled Senate but then casually no-showed for his testimony the next day before Nadler’s Committee.  Nadler struck back by holding a predictably theatrical “empty chair” hearing, with one Democratic Committee member ceremoniously eating fried chicken on the House floor.  Statesman-like stuff.

And when Nadler angrily demanded explanations from Barr about his role in using tear gas to disperse protesters near the White House, Barr channeled the spirit of Sean Penn’s Fast Times at Ridgemont High stoner surf god Jeff Spicoli: “I just couldn’t make it on time.”  Nadler bemoaned Barr’s claim that he “could not find the time” to testify before the Committee and then settled for an agreement that Barr will testify on July 28, more than a month down the line.  As if to rub it in, Barr immediately found plenty of time to sit down for a lovely podcast chat with Ted Cruz.

Recently, Nadler has run in circles explaining why he can’t (or won’t) exercise the power he holds.  In the wake of Barr’s audacious and bungled attempt to decapitate the SDNY, Nadler declared that Barr had engaged in a “pattern of … corruptly impeding all these investigations” — about as serious an allegation as one can level at an attorney general.  And when asked if he would initiate impeachment proceedings, as recommended by Senate Democrats including Elizabeth Warren, Nadler demurred that impeachment would be “a waste of time at this point.”  Waste of time?  As Chair of the Judiciary Committee, what better does Nadler have to do than checking DOJ?  Nadler promptly reversed course, announcing that he “may very well” impeach Barr — before being shut down, again, this time by House Speaker Nancy Pelosi, who whisked impeachment right off the table.

While Barr now has deigned to appear before Nadler’s committee later this summer, it took too long, and Barr has done far too much damage in the meantime.  Nadler should have subpoenaed Barr, right away, as soon as Barr blew him off last year.  No polite offers, no red carpets, no hoping for the best.

And Nadler should have been more aggressive in the courts.  For all the times members of the Administration ignored his subpoenas, Nadler went to the mattresses on one case:  Don McGahn.  Yet it took Nadler nearly four months after issuing a subpoena to McGahn in April 2019 to file a lawsuit in August.  Nearly a year later, that lawsuit drags on, currently in its second go-through at the Court of Appeals.

Nadler should have gotten off the litigation slow train and demanded that the courts deliver expedited rulings.  No litigant can tell a judge what to do, but judges do react if a situation demands quick response.  There’s no magic to it.  Judges control their own dockets, and can move cases as quickly, or slowly, as they please.  It is Nadler’s job to convince a court that enforcement of Congressional subpoenas is an urgent matter, not to be dragged out indefinitely.

When (and if) Barr finally does indulge Nadler with his presence, Nadler and his Committee have a long list of questions they need to ask him.  Why did you falsely tell the American public that Berman would be stepping down, when in fact – as Berman himself stated hours later – he had no such intention?  Why did you want Berman out of the way?  (It certainly wasn’t a competence issue, given that you offered Berman a post at DOJ headquarters).  Why did you dismiss Berman less than five months before a presidential election?  Have you had any involvement in any of the cases involving power players in Trump’s orbit – Rudy Giuliani, Lev Parnas, Jeffrey Epstein and his co-conspirators, Deutsche Bank?  Did you in fact try to prevent Berman and the SDNY from indicting Halkbank, the Turkish bank that, according to John Bolton, Trump promised the Turkish President he would protect from a pending investigation?

On Nadler’s watch as Judiciary Committee Chair, Trump and Barr have politicized DOJ, trampled on the rule of law, and flouted Congressional oversight.  Nadler’s rhetoric has become almost comedic for its transparent impotence.  Nobody even bats an eye anymore when Nadler vows to enforce accountability, and few expect him to actually do so.

Trump and Barr are the wrongdoers here.  But Nadler, too, deserves blame for shrinking in their presence, for enabling crippling abuses of power through his own stubborn inaction.  Words do matter.  But when words go unsupported by action, they tend to fade away into nothing. 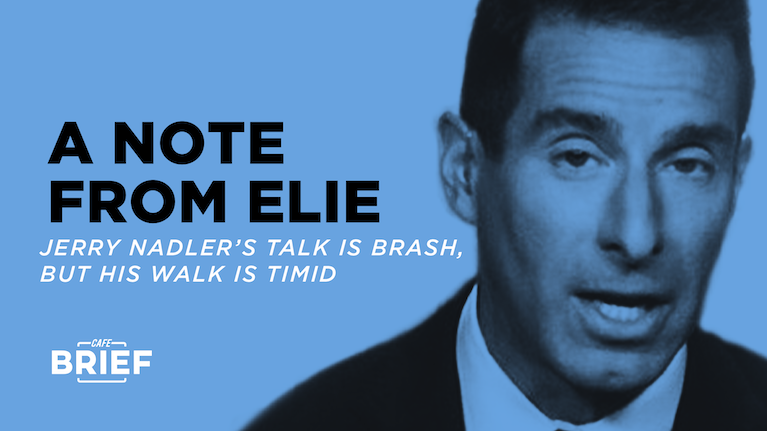 Note From Elie: Jerry Nadler’s Talk is Brash, but his Walk is Timid